Before I get into why it matters for EVERYONE (especially you money makers) I’d like to start with a tweet.

I know I’ve briefly touched on diversity in films in the past but this development has me diving back into the subject.

So a few days ago Rupert Murdoch decided to tweet something. I assume when his old wrinkly thumbs were moving across his blackberry screen he was clear-headed and not at all inebriated. But the tweet he sent out was ridiculous nonetheless. A tweet claiming that all the Egyptians he knew were white so whats the big deal about having an all white cast……for a movie filmed….. in Africa. While I don’t doubt uncle money bags only knows white people in Egypt. Your tiny little club of people you know in Egypt clearly doesn’t represent the entire country. And oh I’m sorry it’s not an all white cast, How silly of me. Here let’s see the cast. 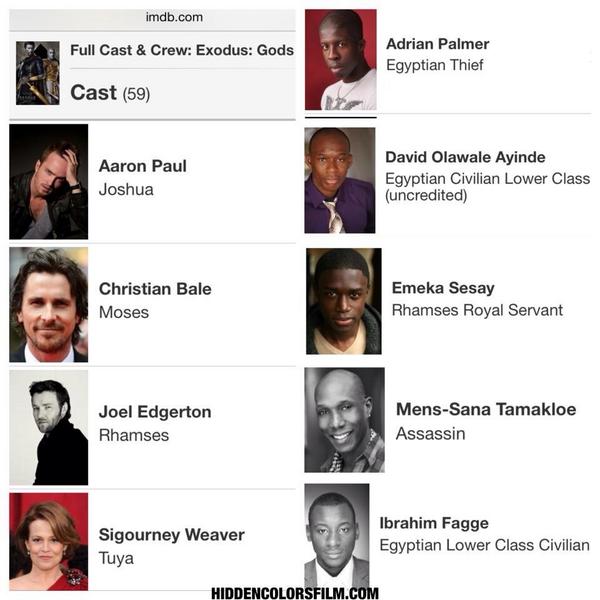 So…the main characters, the kings and queens. Those can be white, but for the slaves and assassins, now we have to be realistic. If all of the Egyptians Murdoch knows are white, why isn’t he complaining that the servants aren’t white as well? Blatant racism and whitewashing is why this film has been facing a boycott since its inception. #Boycottexodus is a pretty huge movement as minorities are tired of getting the old “heave-ho” whenever big productions feel like it. Which leads us to some very interesting statistics about diversity in film. Here are a few stats about Race and Hollywood based on a study done at UCLA.

The lack of minority representation has always been known, but sometimes it’s good to actually see it. It’s actually sickening.  But here’s the GOOD news. Because of things like boycotts and people in general just being tired of this mess. There seems to be an upswing in people going to see films and tv shows with higher minority representation. This comes through in data obtained by

Movies with higher minority representation(21-30%) posted $160.1 million in global box office receipts in 2011. Films with lower Minority involvement(less than 10%) made just $68.5 million. That’s 91.6 million dollars MORE just for doing something you should be doing ANYWAY. I mean asinine, archaic Hollywood casting practices aside, the data is very clear. By being bigoted you are losing money Hollywood. Here’s the full report. See that’s why it matters for everyone, everyone makes more money, A LOT more money in the end. So do the right thing. Diversify your talent, your creators, your directors, hell diversify the agents at the agencies that represent these people. Watch your profits (which have been steadily dropping) soar.